After a lot of research and procrastination, I finally bought a sports watch earlier this year. Pictured here, it’s a Garmin Fenix 7S Solar (black). I’m very happy with it, but was curious when rumours of Apple’s new sports watch began to surface.

Update 02 October 2022 - early reviews have largely confirmed the positive and negative points I discuss in this post, and most seem to agree that the Ultra is both pretty big, and aimed primarily at smartwatch users who want an upgrade from the Apple Watch in terms of battery life and rugged design.

A teardown by iFixit shows the battery capacity at 2.1 Wh - identical to Garmin’s biggest watch, the 51mm Fenix 7X, which runs a month of normal use and somewhere around 100 hours of full GPS. My 42mm Fenix 7S battery is 42% of the Ultra’s capacity and has similar GPS endurance - as you might expect, given the different experience the Ultra is offering.

I am not a fitness fanatic. I’ve started exercising more regularly over the last few years as my age and weight began to rise. I try to do an hour every day, alternating between road bike, stationary bike, and walking here in (flattish) Rutland. I also do longer hikes, sometimes with my sister, who is ticking Munros off at a frightening rate.

Having relied on my iPhone for a long time, I wanted something on my wrist that I could glance at and that was specialised for the job. My criteria were fairly simple:

The Fenix 7S is top of Garmin’s line, but I didn’t want to regret my purchase for want of a missing feature. I could (and perhaps should) have bought the Sapphire edition, which has multiband GPS (which Apple make a great deal of noise over) and a titanium case, but both would be overkill for me.

In general, the Fenix has met my needs. It’s reliable, accurate, frugal with battery, and Garmin Connect is excellent. The 42mm case fits my wrist well and the supplied strap is comfortable. It has many activity profiles which work well, especially for GPS-based and cardio activities. It’s very easy to do things like plot a hiking route on the desktop and have it sync automatically with the watch. Finally, I have Garmin speed and cadence sensors linked to it for cycling, and the ANT+ connection is reliable and quick.

I think we can take most items on the list above as a given for the majority of sports watches. It’s perhaps worth talking a bit more about how a watch can be designed for outdoor activities.

Needless to say, outdoor activities take place in less than ideal circumstances for manipulating a complicated piece of technology. There is weather, clothing and fatigue to consider.

The Fenix meets all of these requirements, and includes the ability to lock the physical buttons so you need a long-press to enable them. I turned this on after a couple of incidents where changing a coat during a hike caused an accidental button-press. I wish you could enable this feature per activity, but at least it’s available.

As I write this, no-one has published a full review of the Apple Watch Ultra and a lot of details are unknown. Also, clearly, people’s needs and tastes differ markedly and these are just my opinions.

That being said, I have some thoughts. Although I’ve never been in the market for a pure smartwatch, I’m interested in bringing technology to my hobbies. Things I like about the Ultra:

Opinions differ on screen technology. The transflective screen of the Fenix is clearly not as beautiful as a high-res OLED, and it can be difficult to read indoors. On the other hand, it is very clear outdoors and is a big factor in the Fenix’s battery life.

Concerns I have about the Ultra:

re Apple Watch Ultra. can you turn off the touch screen? false positives were my biggest beef w apple watch. i use Garmin now (love it) and it has a touch screen that i can toggle on/off with a hard button.

Going by the released specs and some rough measurements, the Apple Watch Ultra appears to be 40% bigger by volume and 45% heavier compared with the Fenix 7S Sapphire (also titanium). Obviously I’m comparing the Ultra with the smallest Fenix, but this seems relevant when looking at the similar battery performance. What’s taking up this extra space? I’m guessing a bigger battery to power the smartwatch features and screen, and the cellular modem. The Fenix 7S has a 0.87Wh battery according to this teardown, and I can’t wait to see a teardown of the Ultra. Update: here's one by iFixit!

Even with the extra space, Apple are being very cagey about battery life. The quoted 36 hours of “All-day battery life” includes no GPS activities. “Multi-day adventure battery life” gives you an estimated 2.5 days of reduced smartphone usage and 15 hours of GPS - but all with a reduced GPS and heart rate sampling frequency.

We’ll have to wait for some real-world testing to see what that means in practice. But extrapolating, this perhaps translates to a solid day of full GPS before a recharge is needed - similar to the Fenix 7S. It’s not meaningful to compare the non-GPS battery life of the Ultra to the Fenix as they are doing very different things.

Who is the Ultra for?

I think that the Ultra is designed for smartwatch users (with larger wrists) in the Apple ecosystem who want a more rugged Apple Watch with better outdoor performance. The Ultra is a solid attempt to meet those needs.

Apple are pushing this as a watch for extreme adventurers, but I think that is largely marketing hype. That is not to say that some extreme sports types won’t use this watch - I’m sure they will. But for longer and more remote expeditions I expect most people will stick to sports watches designed from scratch for that purpose, and which have fewer dependencies on a tethered phone.

Update 16 October 2022 - I got the opportunity to wear the Apple Watch Ultra at an Apple Store, and largely confirmed my early impressions. The watch is chunky - partly thanks to its overall dimensions. But it’s the profile of the watch which contributes most to the sense of size, with a prominent bulge running around the case. Most watch cases taper towards the screen, so despite the Fenix 7S being the same height it looks tiny next to the Ultra. 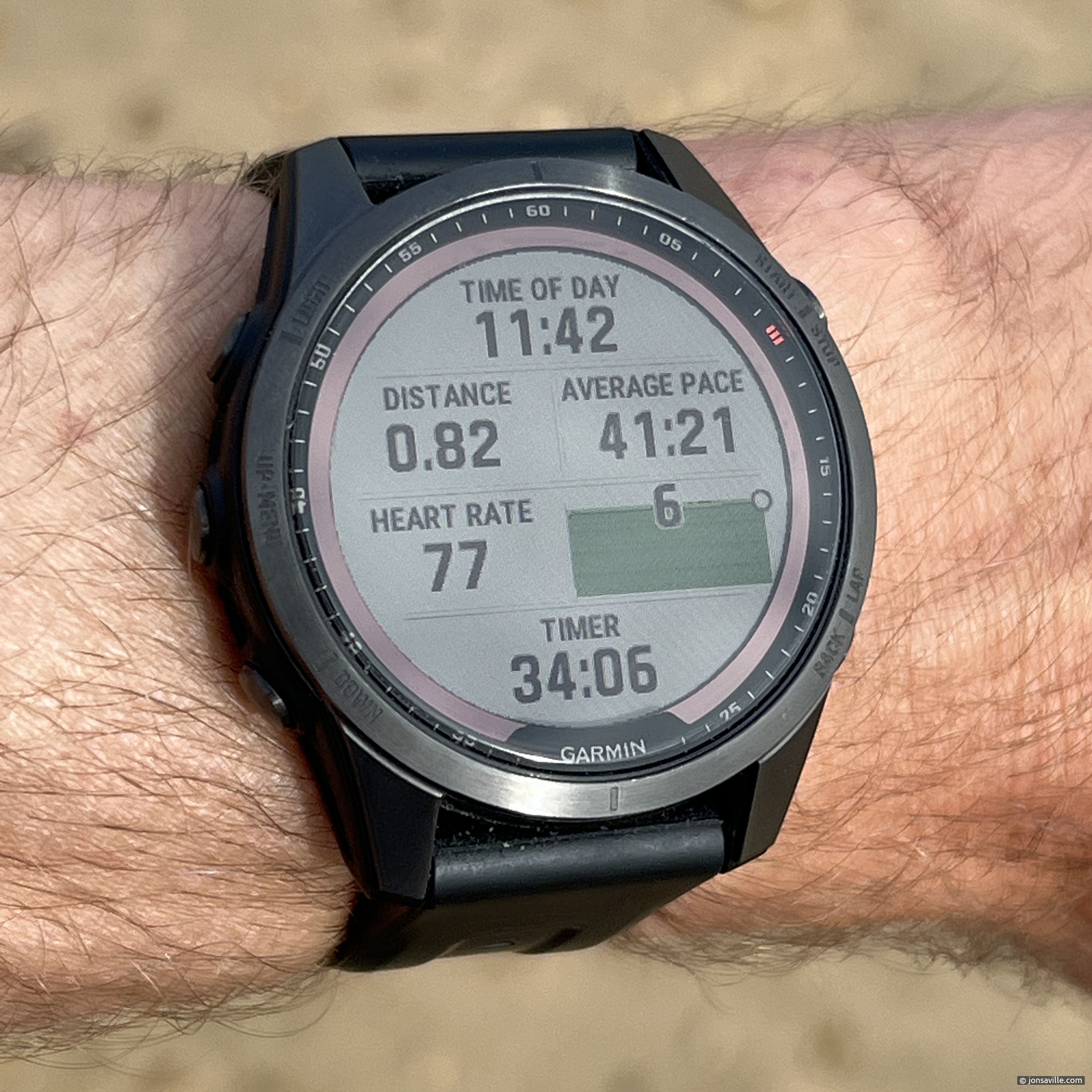 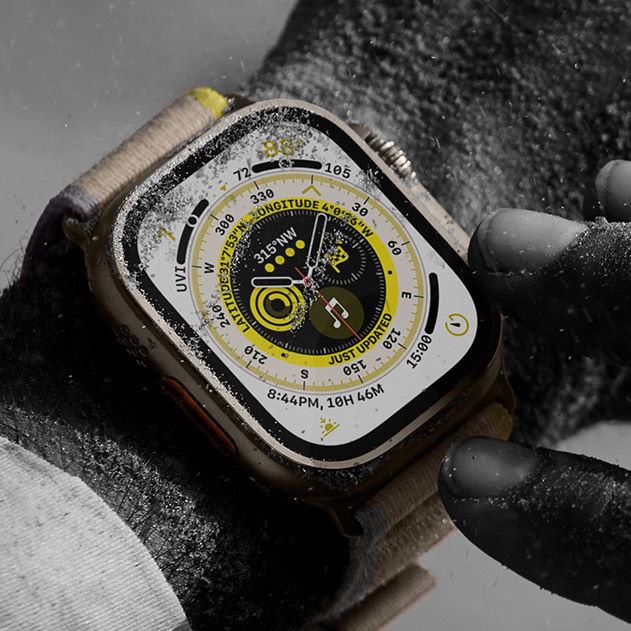 Apple Watch Ultra next to the Fenix 7S 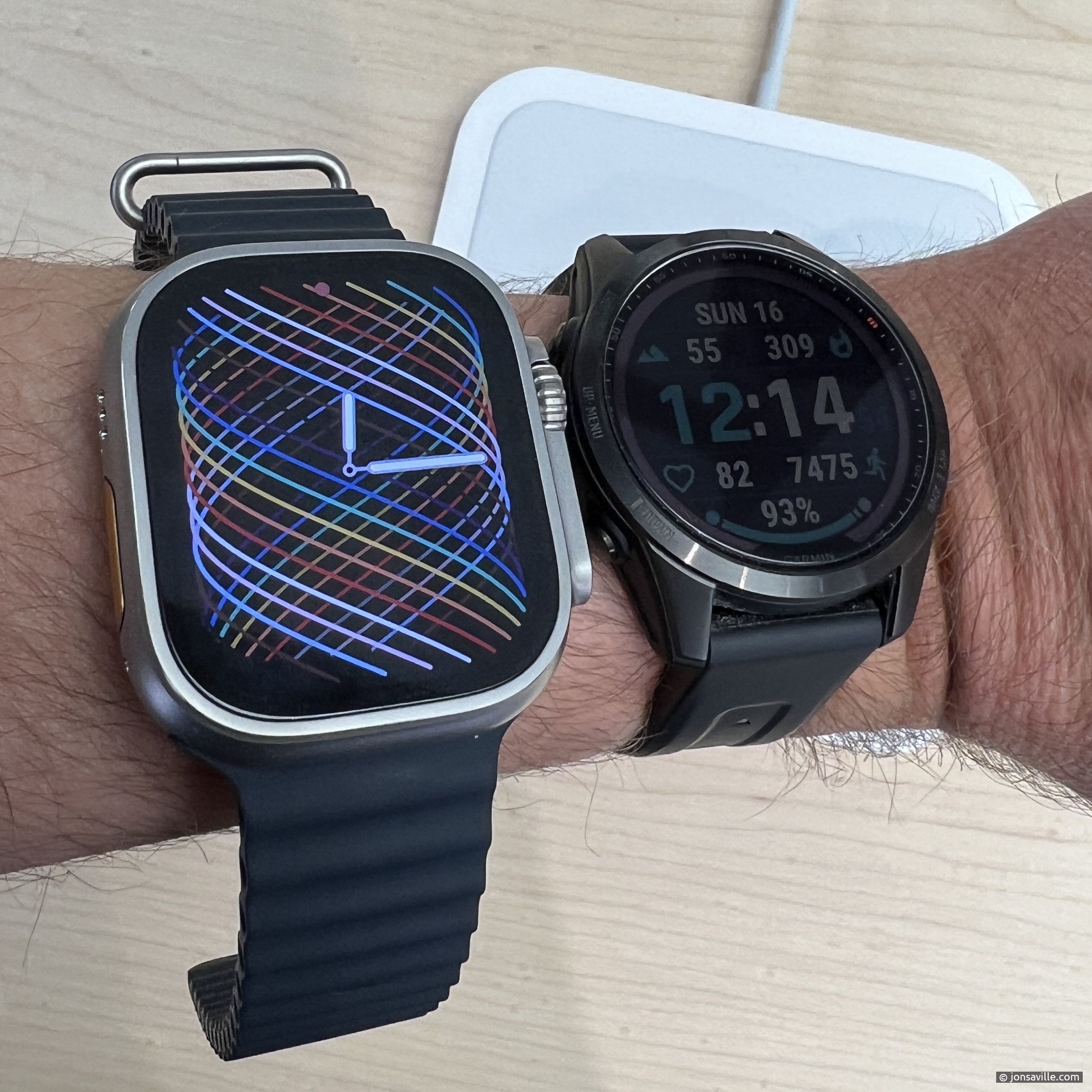